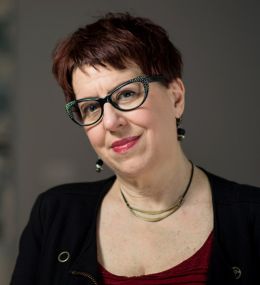 Administration and Office of the Dean

As dean of SMFA at Tufts, Nancy Bauer oversees all operations at the school, as well as the Tufts art galleries and the university's relationship with the Museum of Fine Arts. Bauer's vision is guided by the SMFA's signature mission to teach students how to think and provoke others to think via the study and making of visual art. She works closely with faculty and staff members across the university to forge curricular and co-curricular connections between and among artists and other academic practitioners. In 2015, when the Museum of Fine Arts began looking for an educational institution to become the new parent for the SMFA, Bauer took the lead in developing Tufts' vision statement. Having taught many SMFA students over the years, Bauer was familiar with the SMFA's single-minded devotion to art-making as an intellectual and socially critical practice, and with its innovative educational strategies—including the core importance of mentoring individual students to find themselves as artists.

Dean Bauer, who is also a professor of philosophy, joined the Tufts faculty in 1998 after completing her PhD in philosophy at Harvard University, from which she also earned a BA in Social Studies and a Master of Theological Studies degree. In 2012, having served as director of graduate studies and then chair for the philosophy department at Tufts, Bauer became dean of academic affairs for Tufts' School of Arts and Sciences. In that role, she oversaw half of the departments, programs, institutes, and centers across the A&S curriculum—including the department of Visual and Critical Studies at the SMFA.

Bauer is the author of How to Do Things with Pornography (Harvard University Press) and Simone de Beauvoir, Philosophy, and Feminism (Columbia University Press). She continues to write and publish, often on the role philosophy might be able to play in the 21st century. Bauer is proud to have received numerous teaching awards from both students and peers, including the student senate Professor of the Year award, the Leibner Award for Excellence in Teaching and Advising, and the Teaching with Technology award.

Over her career, Bauer has knit upwards of 100,000 yards of yarn. She is married to Mark Richard, a painter and collagist who masquerades as a philosophy professor at Harvard. Bauer and Richard have four mostly grown children: a website designer, a writer/filmmaker, an art-trained elementary school teacher married to a photographer/comic book artist, and an actor. They all turned out well despite their parents’ failure to refrain from discussing philosophy at the dinner table.