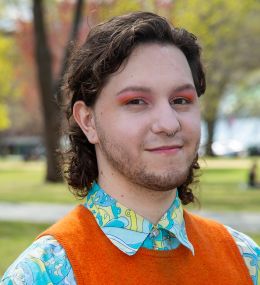 Alexander Bauer is an artist from a small, rural hamlet in Upstate New York. Their work primarily takes the form of mixed media sculptures, often utilizing their ever-growing collection of found and secondhand materials, to playfully explore ideas related to gender, sexuality, and class.

Welcome to the Stage… is a series of five wall-hanging assemblages that examines socialized gender through the language of drag performance.

The work is made by “painting my face” with dramatic makeup and then carefully transferring it onto fabric. The results resemble makeup wipes and serve as documentation of this performative process. Then, they are excessively adorned with jewelry, rhinestones, and other accessories that show the exaggerated materiality of drag.

Each piece is given a drag name based on its personality: Helena Cell (hell in a cell), Lucy Attitude (lose the attitude), Mel O’Drama (melodrama), Minnie Van Driver (minivan driver), April Showers (bring May flowers). These titles employ the humor and wordplay that is common in the names of drag performers.

The work is installed with color-changing lights to reference nightclubs and continuously alter the viewer’s perception of the work. This expresses the constant shifting of gender identity based on context and the presence/absence of an audience.

By exaggerating the body and traditional gender signifiers, drag performers reveal the absurdity of gender and begin deconstructing its seemingly-fixed boundaries. Drag creates a space of improvisation and play, inviting the viewer to join in imagining new ways of existing through glamour, camp, and fantasy. This shows that gender is nothing more than a performance, and we can have a choice in the characters we portray.