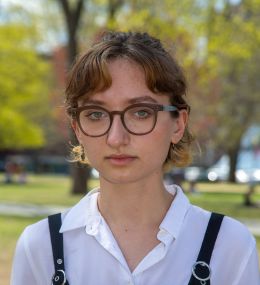 Lily Pisano is a 5th year student in the Combined Degree program at Tufts and SMFA. At Tufts, Lily majors in International Literary and Visual Studies, where she studies Japanese and Gender and Sexuality Studies. At SMFA, Lily primarily concerns herself with sculpture.

Currently, Lily is most interested in memes and the mind and how they relate to each other. Memes are all around us, in multiple realities--they exist in what we consider to be the physical world, the digital world, and the metaphysical world(s). By means of creation, Lily aims to take long walks in these worlds, as she so loves to do wherever she is.

Iteration/Imitation is an exploration of the meme and its construction(s) and transmission(s).

A meme is something that can be imitated--an action that requires a complex set of mental processes in order to be successfully executed. Imitation is conditional on its context; in order for there to be a successful imitation of something, particularly if that thing is to survive in the long term, there must be a shared context from which to begin the process. If that context is not shared, it may still be successfully imitated, but would be a low fidelity attempt and probably not withstand the test of time up against its competitor.

Everything has a history, and a set of iterations that precede it; nothing is novel or new. Whether it is a thought, an object, an idea, a behavior -- we are socialized to carry with us “the past” (as reinforced by a curated and limiting narrative perspective of power) while being told to look to and forge a singular and optimistically collective future. I believe this is impossible given the foundation on which we currently stand. Our passive consumption of media and obligation to a capitalist market does not encourage us to look back and dig in, it asks us to sit still and shut up.

While viewing my work, I ask you only to think and explore. Be curious and do not settle. Zoom in and zoom out and zoom in again. Construct and deconstruct. Let your mind take a turn and then your body. Return and return again and then return once more.