Marlon Forrester is sitting at a long table in the SMFA library where he used to study as an undergraduate. When he leans in to answer a question, he pulls the sunglasses off his face and really connects.

His presence is as electric as the fast-paced games of sidewalk chess he likes to play in the Fenway outside Blick Art Materials, setting down bags of supplies and risking parking tickets to claim checkmate.

“As artists, we’re all giving birth to something,” he believes. And at the moment, Marlon’s studio in Boston’s Jamaica Plain is anything but a static space. “I’m working on really being the best that I can be right now,” he says.

That includes a project with the City of Boston creating a playground structure with large sculptural pieces and preparing for a presentation with Boston’s LaMontagne Gallery at Art Basel Miami.

There’s also a 2021 Collective Futures Fund grant in collaboration with photographer Jaypix Belmer and Casey Currey. The intervention is titled You, Me, We: (D.R.G.) Dystopian Revolutionary Gallery Pod and is bent on creative placemaking to bring people into artistic spaces they don’t typically feel welcome to access.

Marlon’s own family immigrated from Guyana to Boston when he was three years old. As a child he was always creating. He played competitive basketball at Brandeis University before taking a leave of absence and transferring to SMFA.

Although he approaches all things in life as a painter first, he introduces himself as an artist, athlete, and creative.

“Within my community, I was seen as a guy that could go to the NBA,” he says. What happened instead is that he couldn’t deny the riptide pull of the paintbrush and the studio.

He’s equally well known for design collaborations with brands like Nike, Elkus Manfredi Architecture, Mathmatik Athletics, and Converse as he is for installations that engage with the geometric figures, lines, and inclusion of the basketball court.

Walking the SMFA halls, he is visibly moved to be visiting his empty former studio where he logged a lot of late nights.

“When I came here, I was fully immersed in a complete art environment where you have studio classes, theory, exhibitions and you’re developing your practice. Balancing multiple subject areas and objectives worked both my left and right brain. It also gave me the chance to interact with other artists and gauge their aesthetics and juxtapose mine.” He compares artistic styles to languages—each a little different from the next.

Afterwards, he pursued graduate work at Yale School of Art and returned to SMFA as an instructor for several years.

These days, he dribbles between teaching art and design at Edward M. Kennedy School of Public Health, an ambitious studio practice, and #DadLife with two children, switching roles as quickly as his feet used to race across the basketball court.

Yet Marlon really slowed down for a journey back to Guyana, a 2019 SMFA Traveling Fellowship that changed his practice significantly. The experience resulted in the If Black Saints Could Fly 23 series—awarded the James and Audrey Foster prize and exhibited at ICA Boston in 2021.

The work, which is about the Black male body—the same body Marlon lives in—was prompted by a ride down the Essequibo River. When the boat hit an unknown object and the engine stalled, he wondered if they’d get out alive. “The water is dark like coffee, and you can’t see what’s underneath,” he explains.

Eventually the captain got them moving again, but the event made Marlon think deeply about how many cultures and religions are in his country of origin. He embedded these cultures into geometric forms on canvases.

Nodding his head knowingly he says, “I’m realizing that human consciousness goes deeper than what we see on the surface and responds to things that we cannot know intuitively.” 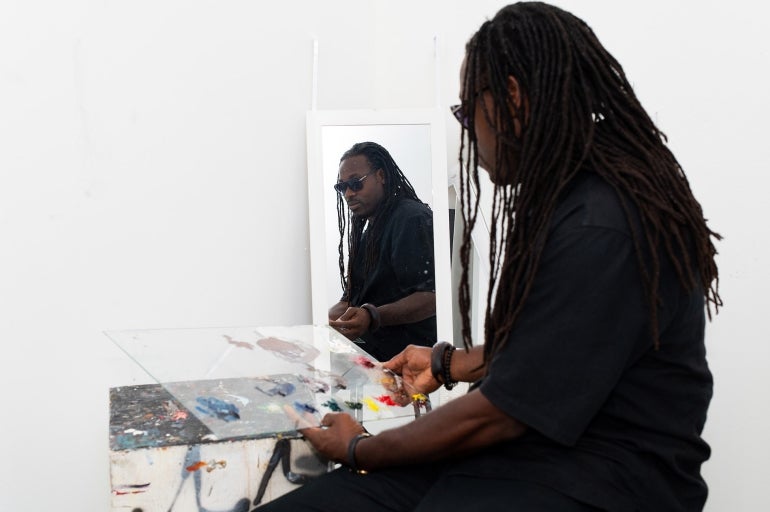 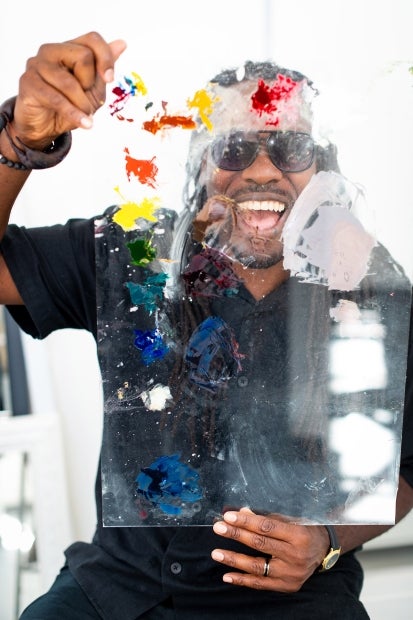 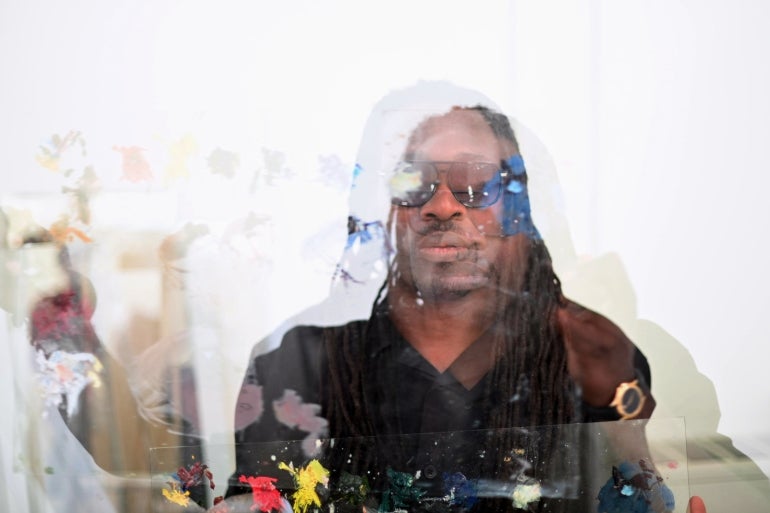