A few years ago, Juan Travieso stopped painting under his own name. He and his fiancée, Katerina Santos, joined up under the tag of TRATOS, which translates to “a deal or an agreement,” in Spanish and is also a clever combination of their two last names.

When SMFA called TRATOS for an interview, both members were high up on scaffolding rigged inside the Frost Museum of Art at Florida International University. They were working on a large-scale mural titled, Golden Lining, in which an endangered golden panther, the school’s mascot, stalks through a jungle with a fiery backdrop. Its eyes follow the viewer with piercing intensity.

Although TRATOS is widely known for their wildlife-themed murals, this piece is a big deal to Juan because it’s inside a museum—a space that typically acquires or borrows work but rarely takes the approach of commissioning an installation on an interior wall. It’s also one of their first collaborations since welcoming a baby earlier this year.

“I’ve been a prolific artist my whole life,” Juan said. “I put in 17-hour days. When you’re married to your career is there room for anything else? Falling in love created this amazing transformation in me as a person and as an artist. Everything is shared and nothing is solitary from this mural–to the baby we just had together.”

Both members of TRATOS come from Cuba originally. Juan recalls socialist state-controlled television which broadcast just a half hour of cartoons per day. With his grandmother watching over him, he would sit on the floor sketching out the characters with utter concentration during the show and then cut them out and create toy figures. Toys weren’t available or accessible and his creations were how he engaged in play.

After his family immigrated to the United States, moving first to Boston, and then settling in Miami, he convinced Ms. Cloverfield, his fifth-grade art teacher, to allow him to paint his first mural on a classroom wall. “I wanted to paint something inspired by Africa because I loved animals, and she thought I was crazy but let me do it anyway. Later, it was in the newspaper.”

Juan has never stopped painting murals and canvases with wildlife themes since that formative moment.

As an undergraduate at ArtCenter College of Design, he began researching conservation and immediately saw the impact on his practice. “I have always been very much in tune with nature and things that are happening like climate change,” he said. “I started becoming very invested in endangered animals. It became a passion of mine to empower animals that are losing their lives.” He’s since painted thousands of species, in collaborations with various brands, on canvases in shows at numerous museums, and in Instagram famous murals around the country.

Juan was offered a partial scholarship to SMFA which made it possible for him to attend graduate school. While he was in the program, he sold more than 500 works of art and those sales launched his practice in such a significant way that he’s still seeing the benefits today.

Because the school gave him so much both professionally and financially, Juan remains deeply committed to donating work to the annual SMFA Art sale, the proceeds of which fund SMFA scholarships for existing and future students at the school.

“SMFA taught me how the art world moves and works. I learned how to network and met a lot of people that are very passionate about art and collecting. They paved the way for my professional career once I graduated,” he said before scrambling back up onto the scaffold and picking up his paintbrush once again. 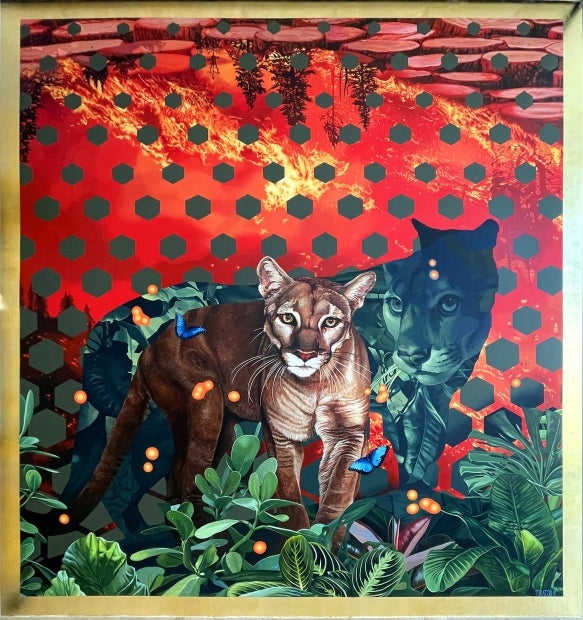 Image courtesy of Juan Travieso. "Golden Lining" by TRATOS at the Frost Museum of Art at Florida International University. 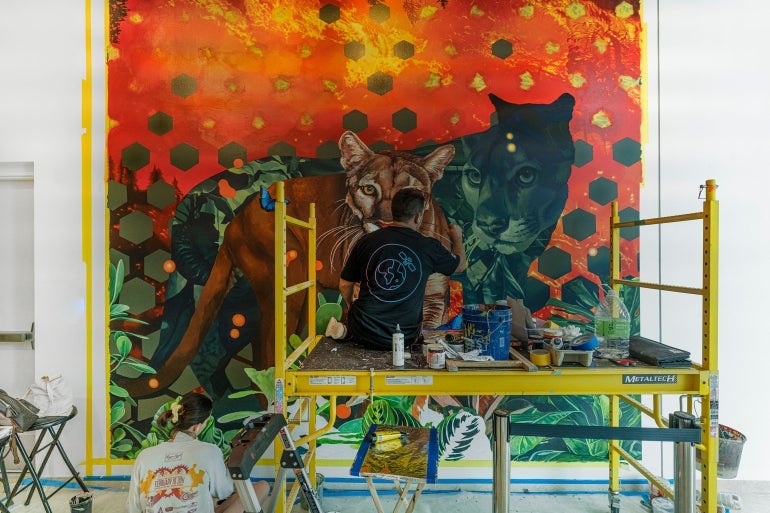 Image courtesy of Juan Travieso. TRATOS working on "Golden Lining" at the Frost Museum of Art at Florida International University. 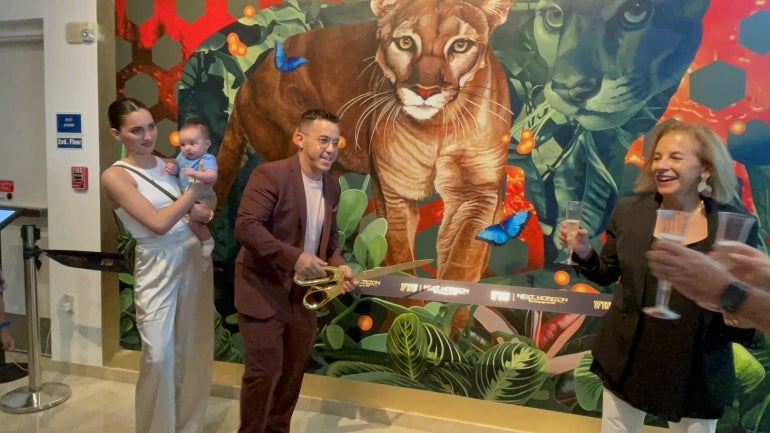 Image courtesy of Juan Travieso. TRATOS at the ribbon cutting for "Golden Lining" at the Frost Museum of Art at Florida International University.