Scrolls of white paper are lined up against the walls of JooLee Kang’s compact studio in Seoul, Korea. One canvas leans suggestively behind her, taking center stage. “That’s my inspiration,” she says, nodding to the delicate work in progress. “Victorian-style wallpaper patterns with animals in utopian nature.”

Just underneath JooLee’s soothing, decorative symmetry lies a shrewd examination of the hierarchy, power imbalance, and sometimes cruel dynamics between the human and natural realms. Her oeuvre—which ranges in scale from large installations to ceramics small enough to hold in the palm of one hand— proves that something ornamental can still have depth and grit to it.

“My work is essentially twisted images that represent something minor,” she explains. “It shows complex tendencies and the double-sidedness of something that is beautiful and yet at the same time is not beautiful at all.”

JooLee’s fascination with flora and fauna is firmly rooted in a childhood spent digging in an urban vegetable garden in Suwon, Korea. She yearned to explore the mountain range within sight of her bedroom window and expressed her curiosity artistically. Visual language came more eloquently to her than verbal language. JooLee remembers, “I could be free, bold, and sometimes wild and loud when I was drawing or painting.”

After studying painting at university in Korea, she landed upon SMFA for an MFA degree because she was excited by its proximity to the Museum of Fine Arts Boston and other impressive museums located in the city. Academically, she was attracted to a program that focused on both theory and practice as she hoped to build upon her interests in museum studies and art theory.

“When I think of SMFA, the word that comes to mind is community,” she says.
She moved to Boston in 2007 and never left permanently, in part due to the close-knit SMFA cohort that offered her the encouragement and support needed to thrive as an international student.

During an early critique of her work, a classmate suggested that JooLee visit Boston area science labs and medical museums. The simple idea proved pivotal to her practice. “That's how I started with Victorian naturalist drawings, technical drawings, and drawings of small animals, plants, and flowers.”

The next chapter of her life involved weaving between Korea and the United States and resisting having to choose a geographical center. She was the recipient of an SMFA 2013 Traveling Fellowship and was also the 2018 artist-in-residence at the Gyeonggi Creation Center in Gyeonggi-do, Korea.

In 2020, JooLee had celebrated the opening of a significant solo show at Gallery Naga downtown, when just one week later the pandemic lockdown took place. She had the surreal experience of standing outside the locked gallery door while the work she’d spent years creating was installed inside for a month without any viewers.

She walked to Blick Art Materials, the supplies store where she and other SMFA students and alumni have bought their supplies for decades. “I picked a weird green colored pen. I was so down that I stayed in bed for two or three days just drawing things I wanted to get out of my system.” Not knowing if borders would be closing, she boarded the next flight to Seoul.

“To work as an artist, one solo show is not enough for two or three years of work,” JooLee says bluntly. She rebuilt and has painstakingly constructed a strong studio and gallery presence in Korea while at the same time rebuilding a full schedule of exhibitions and commissions in the United States.

JooLee is preparing for a 2023 solo exhibition at Harold J. Miossi Art Gallery at Cuesta College in California. The space’s director is another SMFA alumni, Tim Stark.

At the moment, she’s deep in the weeds exploring digital drawings, animation, the idea of NFTs, and how the ornate gilded frames riffing from the Victorian era can be the basis for standalone works. 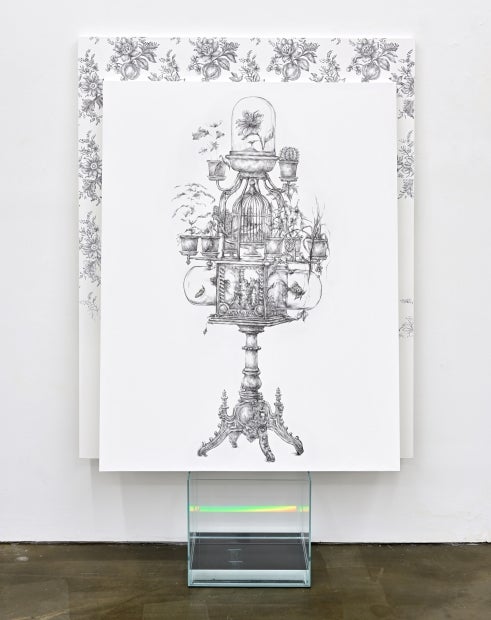 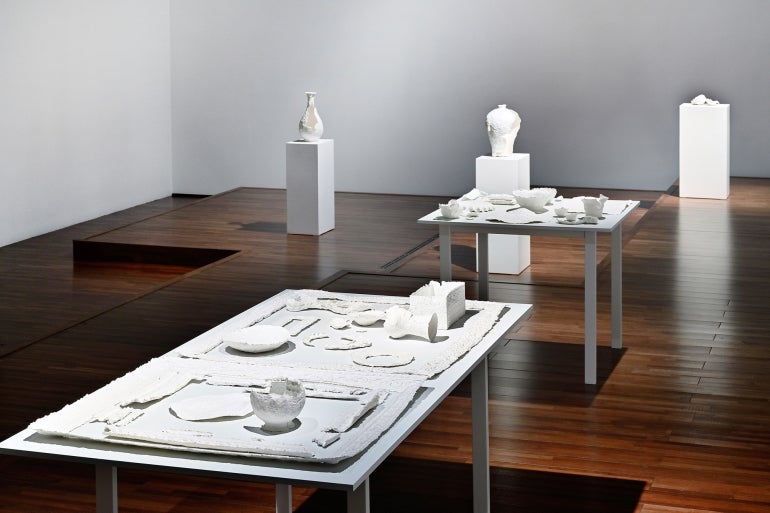 Image courtesy of JooLee Kang. "Not a Piece But the Whole", paper casting, dimensions vary, 2021