Four Greco-Roman columns stand, judicial and imposing, in a three-dimensional rendering of the SMFA Grossman Gallery. Over 4,000 nooses hang between the columns, a powerful symbol of the lynchings that have occurred in the United States since 1877, and continue today.

Izaiah Rhodes, BFA '23, is working to realize this large-scale art installation as part of the Tufts University Summer Scholars program. They spent the summer conducting research on the history of lynchings and creating art that attempts to manifest the atrocities, horror, and trauma Black Americans endure as a result of white supremacy.

The NAACP defines a lynching as “the public killing of an individual who has not received any due process.” Historically, “a lynching involved a criminal accusation, an arrest, and the assembly of a mob, followed by the seizure, physical torment, and murder of the victim. They were often public spectacles attended by the white community in celebration of white supremacy. Photos of lynchings were often sold as souvenir postcards.”

Over 4,000 lynchings took place between 1877-1950, though many historians believe the actual number is far higher. “The spectacle of lynching was used as a visual tool to terrorize African Americans into submission to unequal sociological, political, and economic positions,” says Rhodes. “Lynchings demonstrated a white man’s ability to assert dominance over Black people by any means and with no fear of physical, legal, or other repercussions.”

Rhodes was supported in their research by their faculty advisor for this project, Professor of the Practice and director of the Curatorial Studies program at Tufts Kelli Morgan, who provided them with general guidance and reference materials.

“Izaiah is a brilliant thinker and artist,” says Morgan. “What they are trying to do is visualize the fact that lynchings never really stopped, which is so important because even in a historical context we don’t really talk about lynchings that way. We talk about them in the context of extrajudicial police killings, but we overlook the thousands of dubious suicides and missing persons cases that have occurred across the country. To take this on as an emerging artist is a tremendous undertaking, and it was a deeply personal one for Izaiah.”

Rhodes grew up in Vermont, a state which was 99% white when they were a teenager. “I was completely separate from my Blackness as a child,” says Rhodes. “I felt a tremendous amount of alienation and fear, which I was unable to fully understand or communicate to those around me.”

Rhodes recalled that at age 14 a member of their ski team threatened to lynch them. “I had reached an age where people felt comfortable lobbing death threats at me,” they said.

This summer, Rhodes poured over articles, news reports, and books about lynching and racism in the United States. They were heavily influenced by the reporting of the Equal Justice Initiative, a Southern nonprofit that is committed to fighting poverty and racial injustice, and has documented cases of racially-motivated murders, which are often shrouded in mystery.

“A common thread in these cases is when a young Black man gets a white girlfriend, and then somehow he goes missing or is found hanging in a tree,” Rhodes says. “Instead of investigating these events as a murder, they are labeled as suicides or missing person’s cases. The motivations for these modern-day lynchings are exactly the same as lynchings that occurred in the 1800s. They reveal a social code that exists outside the law.”

Rhodes credits their Tufts coursework and professors with helping them to undertake this project. “Coming to Tufts I got a little more diversity in my life and a lot more support,” they said. “I finally began seeking a thorough understanding of my past and this is when the deep healing began. It was through critical race classes, consuming art outside the European tradition, and doing my own independent research that I finally gained the ability to communicate what had happened to me growing up.”

Their planned installation is intentionally large, haunting, and austere. “It evokes memorials and museums, which have the power to acknowledge human rights violations of the past,” says Rhodes. “Art can help to heal people by affirming their stories, teaching them about a shrouded past, and hopefully provide stark reminders of what not to do, so we do not repeat atrocities in the future.”

Rhodes is continuing their project throughout the school year, and is currently seeking additional funding to complete the pillars and nooses. They have also made a series of accompanying metal sculptures that symbolize the resilience of the Black community.

Reflecting on their work this summer, Rhodes says: “It’s tough to think about injustice all the time, but it would be tougher to stand by and wait for things to get better. I can’t tell anybody what to do about racism, but I know for myself what to do, and that is to haunt that which has haunted me.”

Banner Image Credit: Izaiah sits in their studio with some of their sculptures and an adaptation of the Pan African flag. Designed by Artist David Hammons, the flag is particularly meaningful to Izaiah. “The colors are green, red, and black, and though the meaning of the colors is  not set in stone, black represents the skin that unites us, green is the natural abundance and beauty of Africa, and red is the blood that we all inevitably shed in revolution. This alternate flag represents an acknowledgment of our past and our agency in creating the future we wish to see.” Photo Credit: Ezri Horne. 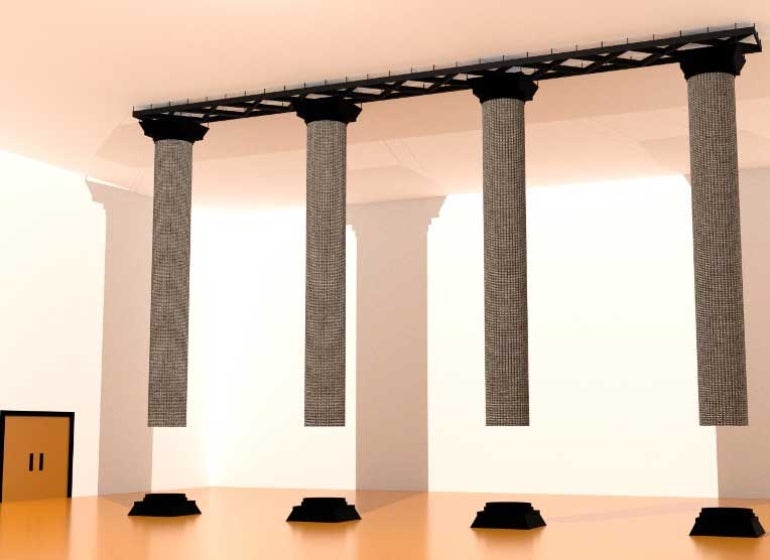 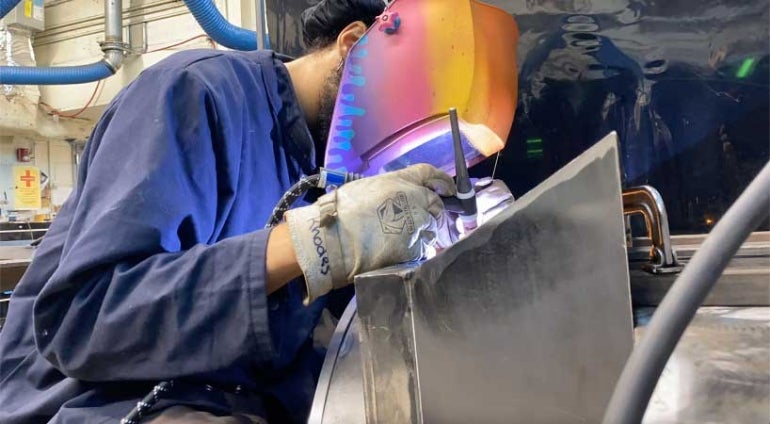 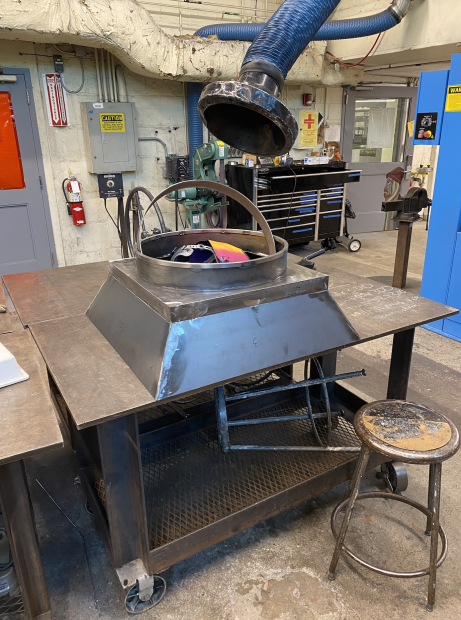 The base of a pillar
Photo Credit: Izaiah Rhodes 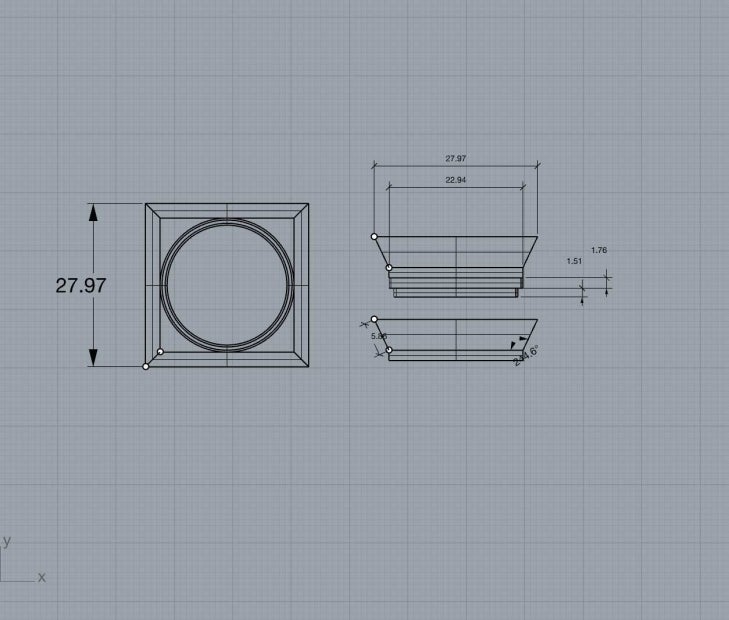 A scale drawing of the base of a pillar 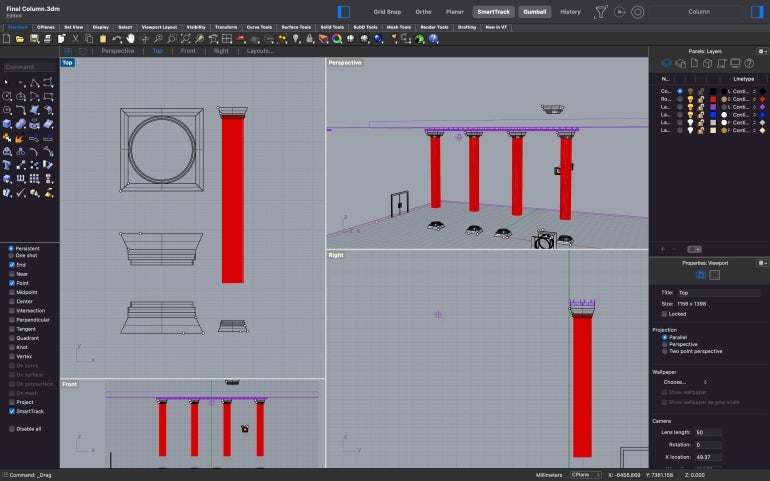 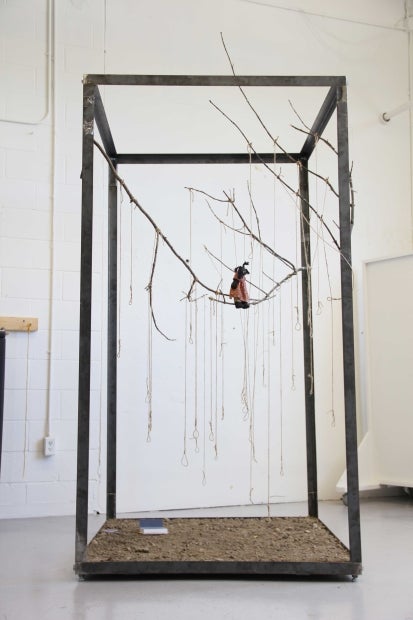 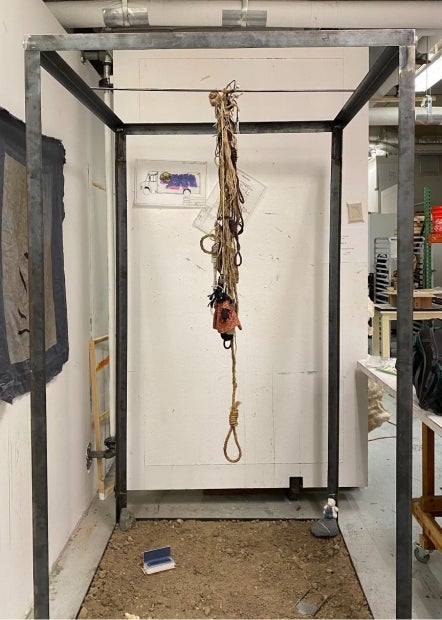 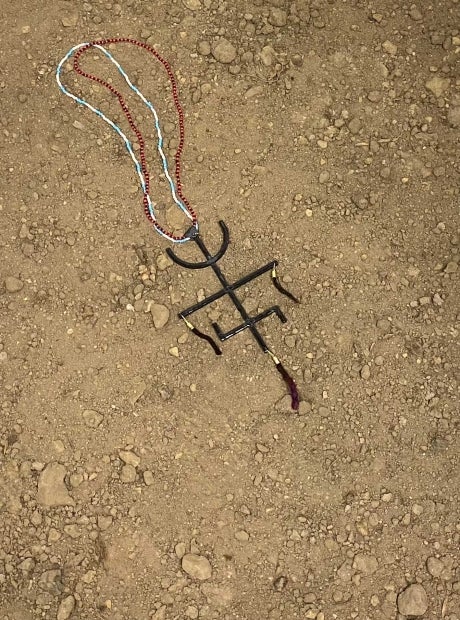 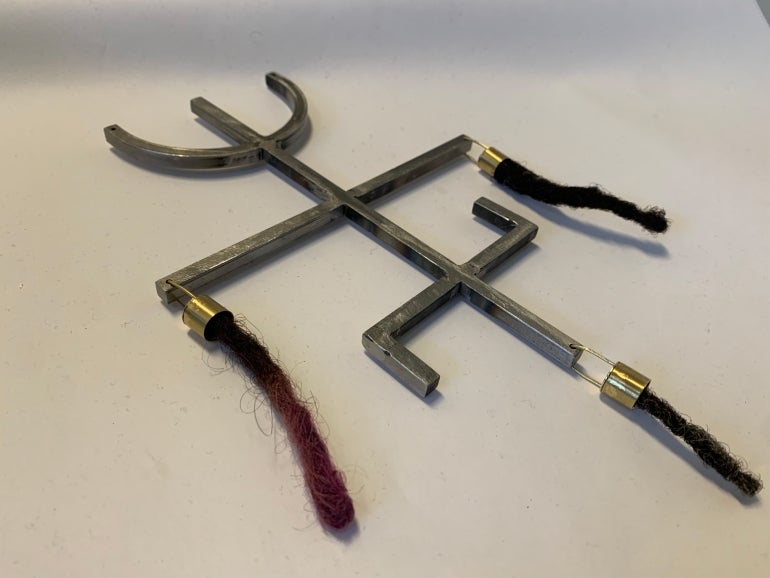 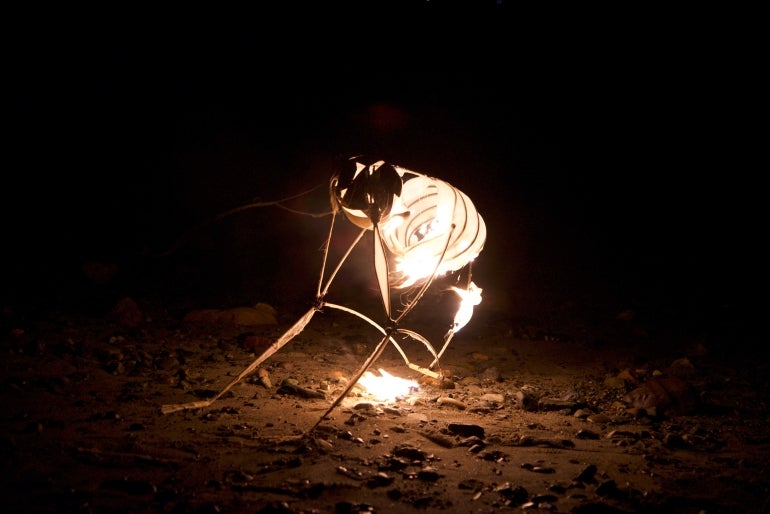 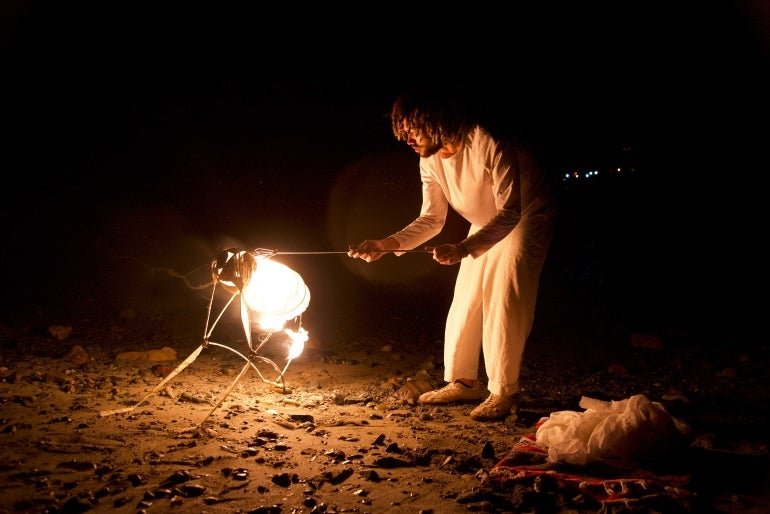 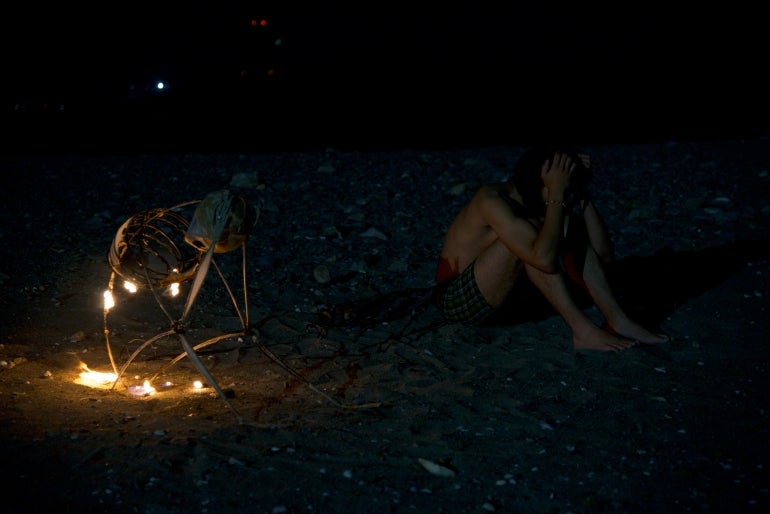 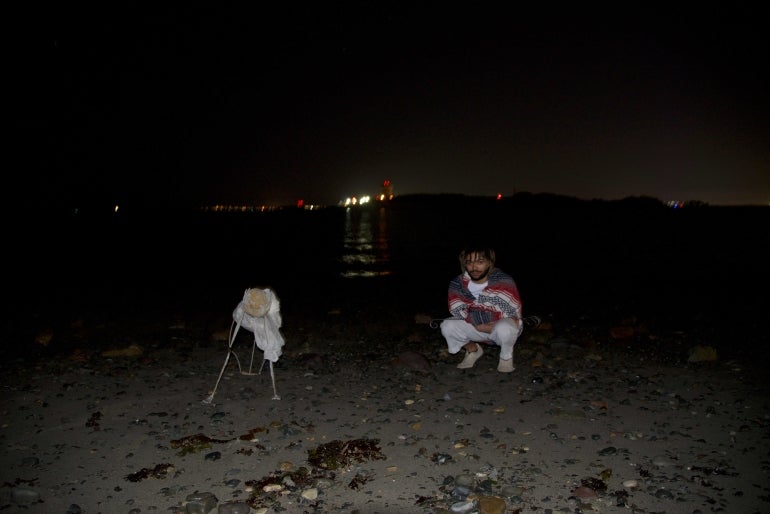